Exchange with the Institut Pasteur 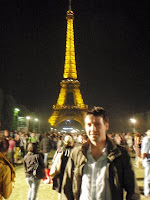 My position at the University of Chicago is funded by a grant awarded to Molly by the National Institutes of Health (NIH) to detect the signature that natural selection has left on the human genome. One of our collaborations is with the human genetics lab of Lluis Quintana-Murci at the Institut Pasteur in Paris, and I'm making the first of a number of exchange visits to strengthen the ties between two labs.

Lluis' group are interested in the selection pressure that pathogens have exerted on the human genome, and in particular a family of genes involved in the immune system known as toll-like receptors. The idea is that together we develop methods to detect and quantify selection in these genes by comparison to neutral regions in individuals from around the world. Among the people involved in the project is Luis Barreiro, a post-doc who has just arrived in the Human Genetics department at Chicago from the Institut Pasteur.

In Paris I've been participating in group meetings, offering my opinion on manuscripts coming out of Lluis' lab, and discussing with lab members how we might analyze the DNA sequence data they're producing. I've also been acquainting myself with the produce of Château des Ravatys (the Institut Pasteur vinyard) and celebrating the 14 Juillet (photo).
Daniel Wilson at 8:57 am 2 comments:

What do researchers do?

Most of my friends (and maybe even my colleagues) don't have much idea of what I do day-to-day. That's the subject of this blog. Modern research is quantified in terms of published articles, but that forms just a small part of daily working life, and the process from conceiving an interesting question or idea to published article is a long and tortuous one. Often articles aren't published until months or years after the research was conducted, and so there is a time-lag between what appears in print and what the current focus of research is. By that time the initial excitement of pursuing novel work is a distant memory, having been supplanted by several rounds of peer review, revision and resubmission.

So this is an attempt to communicate what I am doing now, to talk about what I think's exciting this week (or this afternoon) and to show what being a researcher means on a daily basis.
Daniel Wilson at 8:56 am 6 comments:
‹
Home
View web version