What are the conditions for multiple foci of adaptation?

Selection on standing variation, soft sweeps, parallel adaptation: these alternatives to the population genetics paradigm of the S-shaped selective sweep have in common the idea that the response of a species to a change in selection pressure may frequently involve multiple mutations, which may arise in multiple locales, and which may appear at different sites in the genome. Consequently, the footprint of selection in the genome is different to that expected under a single selective sweep and therefore likely to be missed by scans of the genome looking for selection.

Many examples of parallel adaptation have been put forward, for instance multiple drug resistance in the malaria parasite Plasmodium vivax. But how plausible is parallel adaptation as an evolutionary mechanism, and what are the conditions that make it likely? These questions were addressed by Graham Coop presenting joint work with his postdoc Peter Ralph in one of the stand-out talks of the SMBE conference in Lyon.

Their key finding is that the multifarious parameters that go into building a spatial model of adaptation (strength of selection, the mutation rate, population density, average dispersal distance of offspring) can be distilled down to a single key quantity: the characteristic length given by the equation

When the geographical extent of the species range exceeds this characteristic length, the conditions are right for parallel adaptation. Graham's talk made accessible the complex mathematics behind this result. He has kindly made the slides available (click here) and the paper is now available at the Genetics website (click here).
Daniel Wilson at 4:10 pm No comments:

Discovering the distribution of fitness effects

At this year's Society for Molecular Biology and Evolution meeting in Lyon I presented ongoing work estimating the distribution of fitness effects, which is a collaborative venture with Molly Przeworski and Peter Andolfatto. Earlier versions of this research appeared in talks I presented at Chicago in December (Ecology and Evolution Departmental seminar) and Liverpool in January (UK Population Genetics Group meeting), and it follows on from last year's SMBE presentation in which I discussed methods to tease out sub-genic variation in selection pressure.

There is intrinsic interest in the fitness effects of novel mutations in coding regions of the genome, especially the relative frequency of occurrence of neutral, beneficial and deleterious variants. Yet estimating the distribution of fitness effects (the DFE) is also of practical use when localizing the signal of adaptive evolution. The reason is that in Bayesian analyses, the assumed DFE can influence the strength of evidence for or against adaptation at a particular site. Consequently it is preferably to estimate the DFE at the same time as detecting adaptation at individual sites to avoid prior assumptions unduly influencing the results. 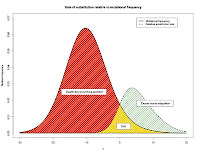 Having estimated the DFE, it is of use in quantifying the relative contribution of adaptation versus drift to genome evolution. The figure, taken from my talk in Lyon (slides here), illustrates the idea when a normal distribution is used to estimate the DFE; the relative area of the green to the yellow shaded regions represents the respective contribution of adaptation versus drift in amino acid substitutions accrued along the Drosophila melanogaster lineage.
Daniel Wilson at 5:51 pm 9 comments:
‹
›
Home
View web version