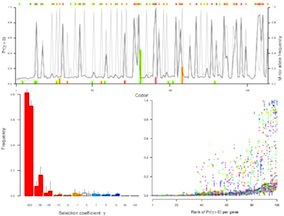 The software gammaMap - which implements the analyses developed in Wilson, Hernandez, Andolfatto and Przeworski (2011) PLoS Genetics 7: e1002395 - is available for download. It is provided as part of a flexible program called GCAT (general computational analysis tool) which is designed to rapidly facilitate novel variations on the standard analyses. GCAT has its own google code page, http://code.google.com/p/gcat-project. GCAT resembles BEAST and BUGs in that a statistical model is specified (using XML) and parameters are then estimated using MCMC or maximum likelihood. Future extensions to GCAT are planned that implement new fast approximations to gammaMap and omegaMap, and parallel processing, allowing the analyses to be scaled more readily to whole genomes.
Daniel Wilson at 9:28 am No comments:

You might also be interested to read a similarly themed review recently published by our friends at the University of Cambridge and Wellcome Trust Sanger Institute in PLoS Pathogens titled Routine use of microbial whole genome sequencing in diagnostic and public health microbiology.

These review articles follow hot on the heels of a pair of research articles published by our two groups: A pilot study of rapid benchtop sequencing of Staphylococcus aureus and Clostridium difficile for outbreak detection and surveillance in BMJ Open and Rapid whole-genome sequencing for investigation of a neonatal MRSA outbreak in the New England Journal of Medicine. The common thread is the impact of near-to-real-time whole genome sequencing on outbreak detection and other translational activities in hospitals and public health laboratories.
Daniel Wilson at 4:37 am No comments:
‹
›
Home
View web version