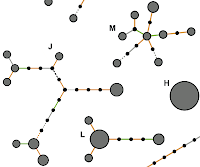 Given its notoriety as one of the world's major causes of infection-related deaths, it may come as a surprise that one in three healthy adults carry the human pathogen Staphylococcus aureus in their noses without adverse effects. Indeed, most people carry the bacteria at some point in their lives. So carriage must be seen as the normal state of affairs in the human-S. aureus interaction, and by understanding this state better we can improve our understanding of why, in some people, the bacteria go on to cause life-threatening invasive disease.

This month sees publication of an investigation by my colleagues and me into the evolution of S. aureus during this normal healthy carriage state. The carriers in our study harboured populations of the bacteria that were very closely related but typically not identical, implying that the bacteria had evolved within the human body. The nose appears to be a microcosm of evolution for S. aureus, showing all the different types of genetic variation known at the species level within the noses of these individual carriers. For the most part, within-host evolution of the bacteria was very conservative, but certain proteins expressed on the surface of the bacteria and toxins secreted by the bacteria showed evidence of involvement in a host-pathogen arms race.

The paper, whose lead authors include Tanya Golubchik, Liz Batty, Derrick Crook and Rory Bowden, has received coverage on the EveryONE blog and F1000. I liked Gerald Pier's conclusion, made on the post-publication peer review website: "Given that about 30% of the world's seven billion-plus humans, and an unknown number of animals, are chronically colonized with S. aureus, the tremendous opportunity provided to this organism for generating genetic variation to counteract human efforts to prevent S. aureus infections may be one of the most formidable barriers to overcome in order to develop vaccines and highly effective interventions to lessen the impact of this organism on human and animal health."
Daniel Wilson at 12:45 pm