In a new collaborative study published this week in eLife, we report a strong association between Staphylococcus aureus that carry the PVL toxin and pyomyositis, a muscle infection often afflicting children in the tropics. 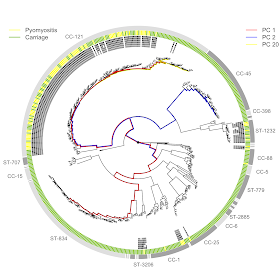 Catrin Moore and colleagues at the Angkor Children's Hospital in Siem Reap, Cambodia, spent more than a decade collecting S. aureus bacteria from pyomyositis infections in young children, and built a comparable control group of S. aureus carried asymptomatically in children of similar age and location.

When Bernadette Young in our group compared the genomes of cases and controls using statistical tools we developed, she found some strong signals:


The ability to pinpoint the association to PVL came about because (i) a sub-group of CC-121 that lacked PVL caused no pyomyositis and (ii) pyomyositis-causing S. aureus from backgrounds that rarely caused pyomyositis were unusual in also possessing PVL.

The strength of the PVL-pyomyositis association was extraordinarily strong, so strong that PVL appeared all-but necessary for disease. Moreover, disease appeared to be monogenic, with no other genes involved elsewhere in the bacterial genome. To discover an apparently monogenic disease mechanism for a common disease is very unusual nowadays.

The discovery has immediate practical implications because it draws parallels between pyomyositis and toxin-driven bacterial diseases like tetanus and diphtheria that have proven amenable to immunization. The fact that anti-PVL vaccines have already been developed in other contexts offers hope for the future treatment of this debilitating tropical infection.

Our study throws much-needed light on a subject that has been the subject of heated debate over previous years. Many bacterial toxins, PVL included, have been implicated in diverse S. aureus disease manifestations, often without sound evidence. Because PVL is known to contribute to angry, pus-filled skin infections, and has been observed in bacteria causing rare and severe S. aureus infections, some authors have implicated it in dangerous diseases including necrotizing pneumonia, septic arthritis and pyomyositis, but detailed meta-analyses have dismissed these claims as not substantiated. Our GWAS approach offers unprecedented robustness over previous generations of candidate gene studies by accounting for bacterial genetic variation across the entire genome.

If you are interested, please take a closer look at the paper.
Daniel Wilson at 5:53 am