In this paper, published in October in PLOS Pathogens, we discovered a novel genetic association between life-threatening invasive meningococcal disease (IMD) and bacterial genetic variation in factor H binding protein (fHbp) through two bacterial genome-wide association studies (GWAS), which we validated experimentally. This was a collaboration with the groups of Chris Tang and Martin Maiden, with the work in my group led by Sarah Earle.

Our experiments showed that the fHbp risk allele increased expression. Interestingly, increased susceptibility to IMD has been previously associated with elevated CFH expression. Therefore over-expression of either fHbp by the bacterium or CFH by the host appears to increase the risk of IMD. Since complement evasion is necessary for pathogenesis, these insights offer new leads for improving treatment.

Key results from the paper:

In this study, our GWAS relied exclusively on publicly available genome sequences and metadata, highlighting the untapped potential of large-scale open source databases like pubMLST.org, and the value of big data for improving our understanding of disease. 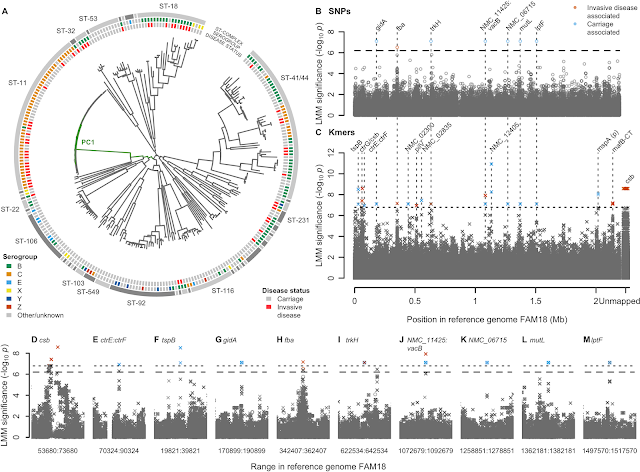